Tommy Rowley - stories about loss of life at sea

Life at sea is often dangerous and the most difficult thing is to watch as fishermen are in trouble and yet you can do nothing. Tommy Rowley recalls

"I remember the loss of the Admiral Von Tromp. I watched on as I saw this trawler stranded on Saltwick Bay near Whitby. The boat was rocking too and fro with the crew stuck precariously in the boathouse. I wanted to do something yet the swell was too heavy. If I had gone in we would have lost our boat too. Its a difficult part of the coast Saltwick bay. The Whitby Lifeboat could do nothing either - it was called out. Bobby Allen, the coxswain tried his best to get close but the swell was too strong."

Tommy Rowley's father had a similar yet much more traumatising experience. He watched on as he witnessed a man burned to death. A man was stuck inside a ship looking out of a porthole. The porthole was not big enough to escape from so the man perished. My father was haunted by this all his life as he watched the poor man burn before his eyes.

My father was in need of the Lifeboat himself on occasions. He was a line fisherman and these coble fishermen could get into real trouble. Storms could build up in a very short space of time. Line fishermen would virtually never leave their lines behind. But hauling in all their lines would take time - and they could easily find themselves in difficulty.

Another difficult experience was connected with my cousin Sean Rowley. He died on the Heritage in 1993. This was a big shock. I had been out at sea when it all happened. I was contacted by the helicopter which told us about the disaster. Local fishing boats came to help. I was in the area in my trawler "Our Margaret" and helped in a sweep search of the area. The helicopter didn't mention who was on board - I didn't know it was my own cousin. Whist I was was still out I was radioed by the Scarborough Evening News. They asked me if I had anything to say regarding Sean Rowley who was believed drowned. I said that Sean was not on board. Afterwards I rang round and found it was indeed Sean who was lost. I had been involved in the search - yet did not know Sean was on board. If an incident occurs at sea other fishermen will help - they do not need to know who they are helping.

It is true life at sea is much safer than it has ever been. In the era of sailing ships was much more dangerous. All they had was their sails and their anchors. When their anchor didn't hold they would be driven ashore. Life was cheap and many men lost.

Despite improved safety I have known 12 fishermen lose their lives through the course of my own lifetime. This is the most dangerous industry known. Those 12 men does not even include the Scarborough Lifeboat disaster of 1954. This was my first taste of how dangerous the sea could be. I was only a young boy. People were running up from the harbour and said that the Lifeboat had capsized. I didn't know what capsized meant - I was just a little boy in short trousers and had never heard that word before. I soon learnt though!

The fishermen all look to their elders. I looked to the experienced fishermen. These were my heroes and mentors. These included Tom 'Denk' Mainprize, Bill 'Jitter' Sheader and of course my own father Tom 'Pat' Rowley. Life at sea is unforgiving and you have to know what you are doing. These experienced seamen all taught me everything I know. They were all medal winners with the RNLI and all knew exactly what to do. They were iron men in wooden boats. When all around did not know what to do these men knew instantly. At sea you need people like that! 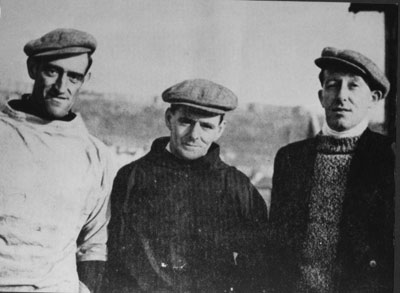 Picture above : Tommy Rowleys heroes - Bill 'Jitter' Sheader, Denk Mainprize, and his father Tom 'Pat' Rowley. As RNLI medal winners they were true seamen. Tommy Rowley was given this photo when the Lord Nelson changed hands. The previous landlord gave him the photo because it included his father.