The following is taken from the log of the German U-Boat which sank 11 Scarborough Trawlers in 1916. He was Ritter Karl Siegfried Von Georg. This log begins just after the U-Boat had torpedoed the steamer 'Laila' and taken its crew onboard.

The many lights of a fishing fleet come into sight. The steamers are fishing in formation in a long line.

On a previous day a fishing steamer had come into sight and I had approached it under water to within 200-300 Metres, without noticing anything suspicious and had traversed my whole allocated area without any sign of hostile action, therefore I can only assume that this was a harmless fishing fleet and I resolve to destroy it.

I approached the last steamer in the formation of approximately 12 vessels to within 40-50 metres and ask the Norwegian Captain of the Laila to do me the favour of rowing to this last steamer and informing him that a German vessel is in attendance, and whose captain is ordering him to leave his vessel immediately, along with all his crew and all his papers, and come back alongside. Any refusal to follow this order would result in the U-Boat using its weapons against it.

I made the Captain of the Laila aware that I had no right to order him to approach the fishing steamer, but that he would be doing me a great service if he acceded to my request. The Captain gladly carried out my request. The Laila boat and a boat from the steamer came back with the crew of the Fisher Prince.

Oberleutnant z. S. Von Ruckteschell, two junior officers and two men were sent back to the Fisher Prince with its crew, after the ship's captain was made to understand the officer's orders. In the event of the slightest reluctance to follow a command, the U-Boat - which would be following closely behind - would make use of its armaments.

It was never my intention to remain close to the fishing steam during the night, I merely wanted to ensure the captains obedience by making this statement.

Amongst the accompanying fishing fleet, one of the steamers is seen to be in motion and heading towards me. Oberleutnant z. S. Von Ruckteschell evidently notices this and heads immediately across the bows of the steamer and forces it to stop. According to its captain, it was merely attempting to set its nets properly. The crew are taken onboard the Fisher Prince.

The Fisher Prince is called back. The steamer Tarantula, which I had gone alongside, was sunk by opening the scuppers.

To the north a fishing steamer is in full sight. Warning shot, signal 'leave the ship'. Its papers are brought aboard, it is the steamer 'James Cook'. The steamer is sunk by artillery fire, its crew to be sent to the Fisher Prince and are towed part of the way.

I proceed quickly, in order to avoid possible enemy submarine attacks, between the deserted fishing steamers and destroy the remaining ships by artillery fire.

I hereby note the outstanding actions of Oberleutnant z. S. Von Ruckteschell for his contribution to the success of this action.

To the south, a fishing steamer is attempting to flee. Warning shot, crew leaves the boat and rows across to the Fisher Prince. which is the only remaining vessel of the fishing fleet.

The fishing steamer Harriet is sunk by artillery fire.

To the south a fishing steamer is in sight, approach it, warning shot, the crew leaves the ship. Fishing steamer Quebec sunk by artillery fire. Papers cannot be confiscated, since a large freight steamer comes into sight to the south. By signal and a warning shot she is brought to a stop.

Captain comes onboard with his papers, she is the steamer 'Tromp' (Norwegian) on a voyage from Amsterdam to Newcastle, unladen.

Captain has a letter of transit from the German Ambassador in Amsterdam as the steamer is in use to bring supplies to the civilian population of Belgium from America. The Tromp is allowed to proceed, her Captain is asked to take on board the crews of the fishing steamers and the lifeboats of the Quebec and Harrier. The Captain promises to make haste with this.

Fisher Prince is sunk by artillery. The steamer 'Tromp' had taken on board the crew of the fishing steamer.

Head to the south-east corner of my area to await probable counter attack and to look out again for warning vessels for zeppelin attacks.

Fishing steamer in sight, warning shot, crew leaves ship, lifeboat with crew onboard taken into tow in order to confiscate papers. Lifeboat capsizes on being pulled level, two people who fell into the water are rescued. Crew taken on board.

Some people have claimed(Ian Duncan. Scarborough Today) that the commander of the U-Boat was showing great courage in saving the lives of 126 fishermen when it would have been easier to have sunk them. The records clearly show the Commanders motives - he wanted to trick the men off the boats. By persuading the crews off the boats one by one he sank them all. If he had opened fire then they would have dispersed.

The U-Boat commander, Ritter Karl Siegfried Von Georg was merely following orders. Crews of sunken vessels had to be looked after. This was the quiet period of the U-Boat campaign following the sinking of the Lusitania in 1915. The Germans desperately wanted to avoid bringing the USA into the war and so unrestricted U-Boat attacks were banned. When he asked the Norwegian skipper to go over to the Fisher Prince "it was all bluff. If the skipper refused to obey, there was nothing I could do". He was surprised at the actions of the trawler which quietly rowed over to surrender. It was the mere word "submarine" which had persauded the fishermen to surrender so obediently. They did not even attempt to warn the skippers of other boats. The commander said that "the English head wasn't working that night". The fishermen were not going to take the risk and probably knew little of the U-Boats strict orders.

Photo above: Scarborough fishermen at gunpoint aboard U57. The man with moustache and clenched hands is thought to be James Megginson who was later to loose his life on board the ill fated Scarborough trawler Jack Johnson SH46 lost with all hands 4/9/1920 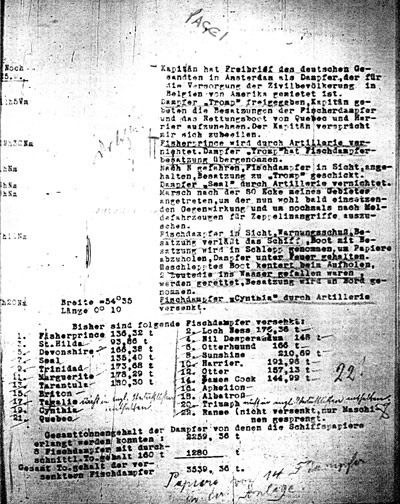 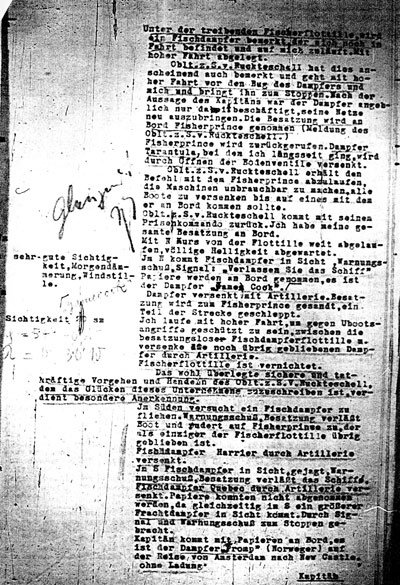 Photos above: The original log book (in German) for U57.