The most unusual incident in British Trawling history perhaps took place on 21st October 1904. The Gamecock fishing fleet, which sailed out of Hull, was attacked by warships completely unexpectedly and without provocation. This incident took place in times of peace.

Two vessels came limping back into Hulls St Andrews dock. One was flying a flag at half mast indicating that someone on board had died. Rumours spread that this was an attack by the Russian fleet. Indeed the Russian fleet was spotted that day off Dover. Thus began what was to become known as the Dogger bank incident. Two trawlermen lost their lives and thirty others were injured.

One trawler the Crane was sunk. It turns out that the Russians mistook the fishing fleet for the Japanese Navy. Russia had just embarked on what turned out to be a disastrous war with the Japanese. This caused a major diplomatic incident and almost caused war between England and Russia.

The Gamecock fishing fleet encountered the Russians at night during fog. They thought the warships were English and were delighted to watch their manoeuvring. The warships powerful searchlights were turned on. The fishermen "ceased their work, and laughed and revelled in the glare".

One of the skippers, Captain Whelpton, described how "the faces of the Russian sailors could even be seen. I called all hands on deck to witness what I thought was going to be a brilliant spectacle". Suddenly the galley Funnel of the trawler Mino, was hit. "Good god!" He said, "This is not blank,lie down lads and look after yourself"[Scarborough Evening News 24th October, 1904].

The boat which was sunk was the Crane. The men on board were helped off. The scene was ghastly as two men, the skipper George Smith and his mate, had their heads decapitated by shots. The two men decapitated were found found with "their fishing knives in one hand, and fish in the other, having suffered death in the act of gutting their fish".

The skippers son acted in a courageous manner in helping get injured men below. He had to pass the decapitated body of his father. This was Joseph Alfred Smiths first time at sea. Walter Wood says "Few North Sea men have had a sterner baptism than this."

Skipper JW White (of the mission steamer Joseph and Sarah Miles) gave the following account "I could see that the skipper was not on the bridge. I went aft, passed the chief, who was bleeding, gave him my neckcloth to stop the blood, went right aft and saw the skipper lying on the grating. I said 'Oh, My God, he is shot!'

I picked him up and saw his head was battered to pieces. I dropped him, rushed down the forecastle, and saw the boatswain lying on the floor, with his head battered in... When the boy came to me and said 'Where is my father?' that was a pill I could not swallow. For the life of me I could not tell the boy what had happened to his father"

The vessels had no chance of escape. They had their nets down and so were unable to run. They simply had to endure a continuous twenty minute barrage. The seamen witnessed the shots as they "whistled" past them. A blue light was signalled on one of the warships. This was the signal to cease fire.

It was obvious what the fleet was. Skipper JS White continues his account "The searchlights made everything like day. The fireman, while he as in the engine room, saw the warship that was firing on us - saw her through the hole they made in the ship's side. They made a target of us. They needed no lights to see what we were. The searchlights told them plain enough "

The Mission surgeon, Dr Anklesaria, who was on board the "Joseph and Sarah Miles", looked after the wounded and gave the following account:"I have never witnessed such a gory sight. Two men lay on deck with their heads nearly blown to pieces. In the cabin the scene was more heartrending still. when I saw six men stretched about anyhow, bleeding and groaning with the agony of their wounds. Under the circumstances, I had them all removed on board our ship.

With all these wounded men on board, our floating hospital looked like a veritable sight. It Kept me busy with knife and needle the whole of that day, and it was not until late in the night that I had the satisfaction of seeing them all safe and snug in their cots, as far as circumstances allowed."

Walter Wood has the following account of the sinking of the Crane "When it was seen that the Crane was sinking, Charles Beer, mate, Harry Smirk, chief engineer, and Edwin Costello, boatswain of the Gull, went off in a boat to rescue the survivors. When they got on board the Crane they found the living members of the crew lying about injured.

The vessel was in total darkness and it was known at any moment that she might founder; yet Costello went into the horrible little forecastle to bring up Leggett's body body. This he succeeded in doing, and was going below again to see how much damage had been done by shot and shell, when his comrades shouted him to come back instantly, as the trawler was sinking.

She went down almost immediately. Beer, Smirk, Arthur Rea, engineer of the Crane, Smith the mate, and Costello received the Albert Medal for gallantry. With the exception of Costello, who was prevented by illness from visiting London, the men attended Buckingham Palace on the morning of Saturday, 13th May 1905, and the decoration was conferred upon them by Edward VII, who had been deeply interested in the outrage.

Smith, who took charge of the Crane when the skipper was killed, refused to leave her till every man had been taken off. Rea showed unyielding courage when, in spite of the fact that the little ship was actually foundering, he groped back to the engine room, which was in total darkness, and tried to put the engines on to full speed ahead. The stokehole was flooded with water, and Rea could do nothing.

He went on deck, where the skipper was lying dead, and all the survivors were wounded except the boy."An interview in the Scarborough Evening News with Captain Peaker, skipper of the steam cutter Magpie summed up the shock: "The low skunks! The cursed murderers!" The Captain suddenly lost control of himself as his mind went back to the full horrors of the night, and his face went purple with passion, it was some minutes before he could continue.

It was a dreadful mistake. The Russians really had no excuses. The trawlers were very distinctive "their build is quite distinctive and easily recognisable". They could not be misinterpreted for torpedo boats. Each carried duplex lamps and the trawlers all had their nets down.

It was truly shocking act. It was so unexpected. Britain was not at war. The warships were thought to be English. Fishermen face many hardships at sea. But they never expected to have battleships open fire so brutally upon them. 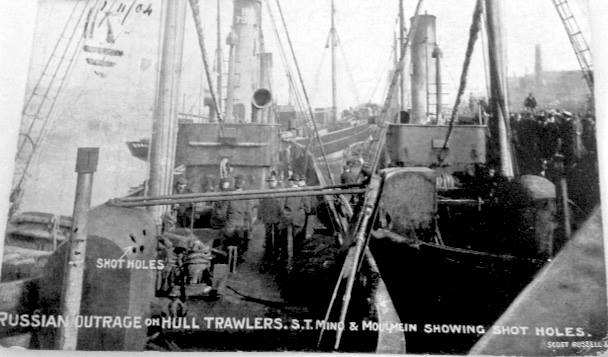