The history of the Graham Sea Training School

The School building was provided by the Mayor Mr C C Graham in 1918. He bought the building and donated it to Scarborough Corporation. Paradise House is situated just beneath the castle - a large house overlooking the town. It had been previously owned by the Tindalls, a famous family in the Town. Mr Graham always kept an interest in the School's progress. In 1925 the training ship Maisie Graham was bought. It was named after Mr Graham's daughter Maisie Graham.

The Maisie Graham was fondly remembered. In 1925 she sailed to meet Queen Elizabeth, Queen of the Belgians. The School proudly placed a portrait of her in the Front Porch. 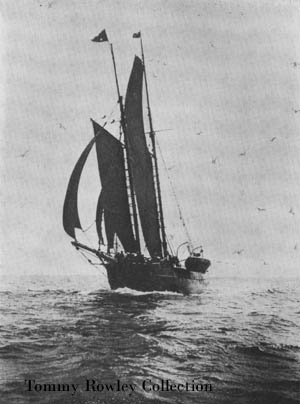 Picture above : The first Maisie Graham. Several other boats were named Maisie Graham over the years. This was the first and most fondly remembered.

She left in 1935 and was replaced by a more modern vessel. She was sold to the outward bound Moray Sea Cadet School at Burghead, a few miles from Gordonstoun. In 1955 she was broken up at the yard of Herd and Mckenzie shipbuilding in Buckie, Banffshire in 1955.

The Sea Training School has always had strong links with the Navy. It was established during the First World War and aimed to give Scarborough Boys initial training for the Navy. It had been housed in the Sea Cadets building on Tuthill. The Navy encouraged and supported the School whenever possible. They gave advice and often came round to inspect the pupils.

The Navys support of the school was repaid in the Second World War. Many of the old boys were mentioned in despatches, some won DSM's and OBE's. Too many of the boys were sadly lost in the War.

The School was taken over by the North Riding in 1944. As the school became absorbed into mainstream education there was a reduced emphasis on seafaring within the curriculum. The school in many ways resembled a Public School. Old boys went onto become Harbour Masters, members of the diplomatic service, artisans, Chief Petty Officers, Ships Captains and radio operators. So a wide ranging and balanced curriculum was needed.

A good school will always be quite homely. Everyone feels that they belong. This was certainly the case with the Graham Sea Training School. The school also nurtured the boys sense of adventure. The School provided a safe and pleasant environment yet also instilled discipline.

Indeed the school was a former private residence. The stables were converted into the workshops. The original front porch remained along with the fireplaces and ornamental rails. Yet it still had the look and feel of a private house. It sat looking out over the south bay nestling underneath the Castle. An idylic setting capable of inspiring any child.

A school that is valued is one that will succeed. There was a maximum of 115 places on the school register yet each year there was far more applicants. Old boys would return and visit the school with a warm welcome.

From one year to the next things never changed. The same caretaker worked at the school for 52 years excluding wartime service. There was a real sense of belonging.

If the school needed something the local community rallied round. When there was a fire in the library parents and locals rallied round to provide replacements.

Above all, the Graham Sea Training School was part of the community. It was like a village school in the heart of a town. It reinforced the community spirit within the Old Town and the fishing and seafaring community.

In the modern era children looked at their futures and choose a path to follow. They get given careers advice. In times gone by the children had their futures mapped out. The Boys followed their fathers into the fishing industry. They married girls from other fishing families and continued to live in the Old Town. So it was logical that they received training along these lines.

The School was proud of the towns maritime heritage. There were pictures everywhere of ships and maritime scenery. They had models of several ships including a steamer, an Arab Dhow and a clipper which used to sail between England Australia. Everywhere there was reminders of the sea - compasses, sextants, and lifebuoys.

Nowadays, the School has been turned into a block of private flats. Jim Spencer, a committee member of the Scarborough Maritime Heritage centre lives in one of the flats.

Yet the memories of the old school were all fond ones. The friends they made, the community they became a part of, the inspiration they gained from the sea training. The sound of the ships bell sounding the end of one lesson and the start of the next.

In the 1970's the Graham Sea training School closed down. In 1973 it became part of Boys High School. It continued on for a while. Mr W Herbert, the Principal, found a keel boat. It was immediately renamed the Maisie Graham. It sailed into port crewed by Mr William Rippon(a teacher at Grahm Sea Training), Jim Sheader (a local fisherman), and Gordon Ladle, a marine engineer. But pretty soon the Graham Sea Training School was to become history.